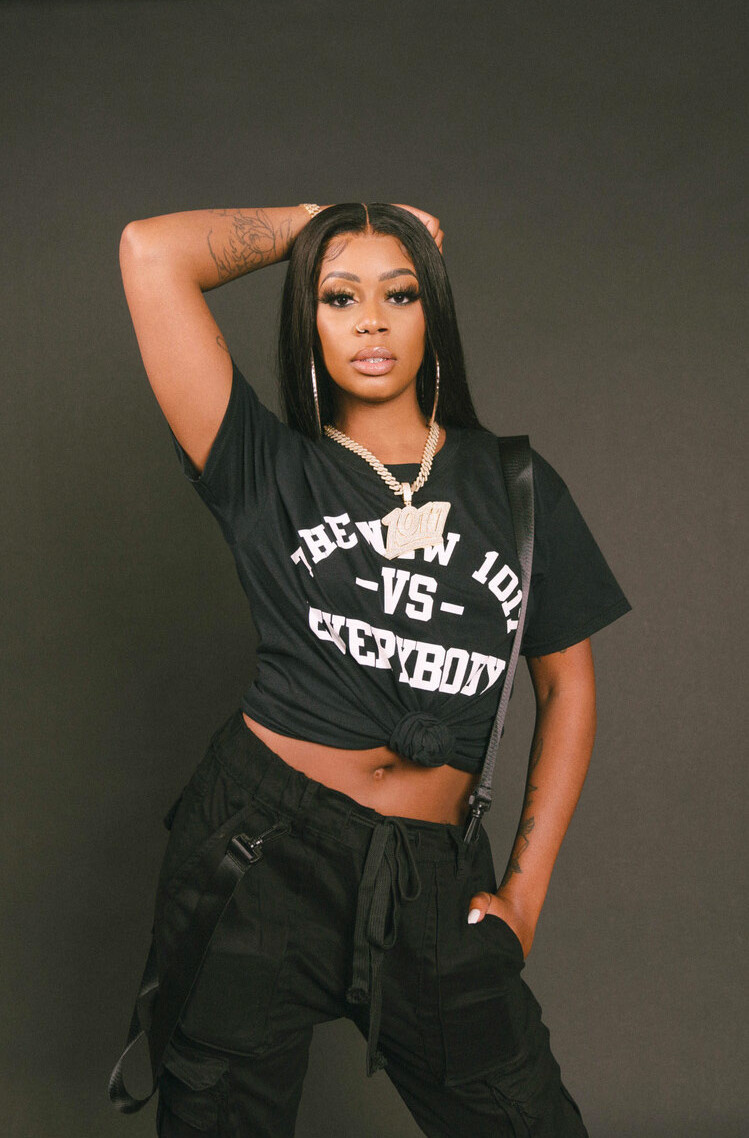 KShiday
On July 3, Gucci Mane dropped a 24-track compilation album introducing the rising talent of his The New 1017 label. K Shiday stood out by lending her icy flow to “Iran” with her label boss, “So Icy” with labelmate Pooh Shiesty, and “Left on Read” with labelmate Enchanting as So Icy Girlz. Her So Icy Summer debut comes after Gucci Mane announced her signing on his Instagram in May, making her the label’s first female signed before she was joined by her So Icy Girlz counterpart Enchanting shortly after -a conscious choice by Gucci Mane to embrace more female voices and give them an opportunity to make it in the game.
It should be surprising to fans that K Shiday has only been rapping since 2019, although she’s always wanted to bea musician. At home in San Antonio, TX, K Shidayremembers her parents playing more R&B than hip-hop: a tradition that influenced her to want to become an R&B singer. “My mom, she was a singer. And my stepdad, he was a singer,” she says. “My whole entire family was really big into church. They always sang in the choir.” During this time, K Shiday developed her love for Lauryn Hill and Aaliyah, alongside other classic favorites like Joe, New Edition, 112, and Boyz II Men.
It wasn’t until high school that K Shiday was fully recognized as an artist. One of her earliest performances was of a song she wrote and played on the piano.After she graduated high school in 2010, she began doing local shows and club appearances in San Antonio. “Life happens” as she describes, and she briefly quit music to join the army in 2012. She served for almost eight years as a sergeant, stationed in Campbell, Kentucky and Seattle, Washington while earning a Bachelor’s Degree in Justice Administration and working towards her Master’s Degree in Jurisprudence under the Green to Gold program in hopes of becoming a lawyer. In 2018, during her last two years in the army, her schedule as a full-time student allowed for the creative freedom to do music again. By this point, she had the discipline of a military background to be more structured and organized, and used the life principles she learned to help take her music to the next level.
In 2019, she gained the confidence to take rapping seriously after performing for a tough Seattle crowd. “It was the first time they’d heard me rap. For the most part, it was the first time they’d seen me perform, period,” she says of the city that ended up becoming a key part of her growth. “The crowd was screaming, and they never did that when I performed my R&B songs! It just motivated me to flip such an unimpressed crowd.”
K Shiday is polishing her sound, and the delicate work-life balance of being an artist and a mom isn’t going to stop her from taking over. “I feel like the different sides of my life also show a lot through my music,” she says. After her introduction on So Icy Summer, K Shidayis working towards showcasing her individuality and versatility. And just as importantly, the rest of 2020 is about continuing to push The New 1017 movement and stamping themselves as the crew to pay attention to.
terms

By submitting my information, I agree to receive personalized updates and marketing messages about KSHIDAY based on my information, interests, activities, website visits and device data and in accordance with the Privacy Policy. I understand that I can opt-out at any time by emailing privacypolicy@wmg.com.